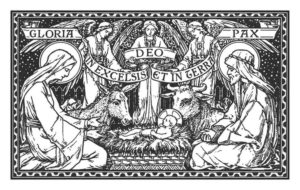 The General Instruction of the Roman Missal devotes a paragraph to describing the Gloria and its setting in the Mass. “The Gloria in excelsis is a venerable and ancient hymn by which the Church, gathered in the Holy Spirit, glorifies and entreats God the Father and the Lamb” (General Instruction of the Roman Missal, 53). While the Gloria may be sung by cantor, choir, or people (or a combination of these), the instructions emphasise the indispensability of this precise text for this point in the Mass. But why?

I can suggest two reasons for the Church’s particularity about the Gloria. Its antiquity is only half a reason: the period of the Church’s history in which it originated and its genre make it a treasure of the Church’s liturgy. During the second and third centuries, when the Church underwent vigorous persecution, poems of praise (psalmi idiotici) composed by the faithful were popular. Only two of these remain: the Gloria and the Te Deum. The Apostolic Constitutions (4th century) recommend the Gloria as a morning prayer — not just for Mass, that is, but for every day! And the whole hymn is built on the song of the angels who heralded Christ’s birth: it also belongs to the rare class of hymns named ‘angelic.’ Singing the Gloria at the start of Mass gives us an opportunity to remember that we are in the mystical company of the angels and saints, and to join in their eternal praise.